The Noonday Demon by Andrew Solomon 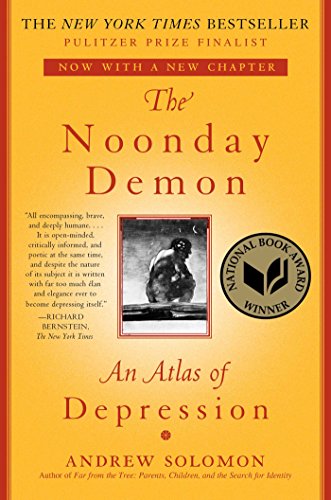 The Noonday Demon: An Atlas of Depression is a 2001 memoir written by Andrew Solomon. It examines the personal, cultural, and scientific aspects of depression through Solomon's published interviews with depression sufferers, doctors, research scientists, politicians, and pharmaceutical researchers. The book is an outgrowth of Solomon's 1998 New Yorker article on depression. It was published in hardcover under the Scribner imprint of New York's Simon & Schuster publishing house, and later in paperback under the Touchstone imprint. Solomon's work received positive critical response, being described by the New York Times as "a book of remarkable scope, depth, breadth, and vitality." The book went on to be honored in 2001 with the National Book Award and with the Lambda Literary Award for autobiography or memoir. In 2002, it was a finalist for the Pulitzer Prize for general non-fiction.

The 253rd greatest nonfiction book of all time