The Hemingses of Monticello by Annette Gordon-Reed 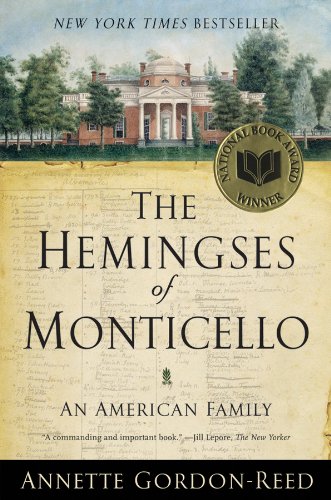 The Hemingses of Monticello: An American Family is a 2008 book by American historian Annette Gordon-Reed. It recounts the history of four generations of the African American Hemings family, from their Virginia origins until the 1826 death of Thomas Jefferson.[1] It is based on Gordon-Reed's study of legal records, diaries, farm books, letters, wills, newspapers, archives, and oral history. Gordon-Reed aimed to allow readers to "see slave people as individuals" and to "tell the story of this family in a way not done before". Jefferson scholar Joseph Ellis has called the book "the best study of a slave family ever written".. The Hemingses of Monticello is the winner of the 2008 National Book Award in Nonfiction, the 2009 Pulitzer Prize in history, the 2009 George Washington Book Prize, and the 2009 Frederick Douglass Book Prize. It was also a finalist for the 2008 National Book Critics Circle Award in Biography.

The 444th greatest nonfiction book of all time