The Breakfast of Champions by Kurt Vonnegut 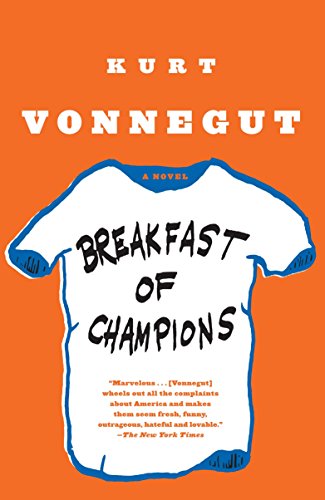 Breakfast of Champions, or Goodbye Blue Monday is a 1973 novel by the American author Kurt Vonnegut. Set in the fictional town of Midland City, it is the story of "two lonesome, skinny, fairly old white men on a planet which was dying fast." One of these men, Dwayne Hoover, is a normal-looking but deeply deranged Pontiac dealer and Burger Chef franchise owner who becomes obsessed with the writings of the other man, Kilgore Trout, taking them for literal truth. Trout, a largely unknown pulp science fiction writer who has appeared in several other Vonnegut novels, looks like a crazy old man but is in fact relatively sane. As the novel opens, Trout journeys toward Midland City to appear at a convention where he is destined to meet Dwayne Hoover and unwittingly inspire him to run amok.

The 489th greatest fiction book of all time