Devil in the Grove: Thurgood Marshall, the Groveland Boys, and the Dawn of a New America by Gilbert King 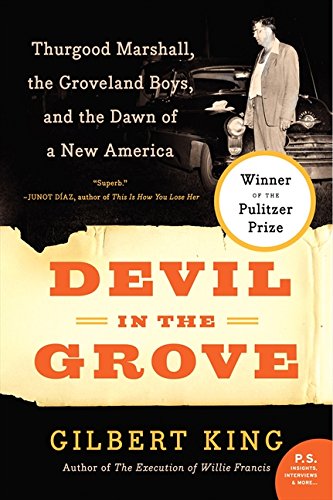 Arguably the most important American lawyer of the twentieth century, Thurgood Marshall was on the verge of bringing the landmark suit Brown v. Board of Education before the U.S. Supreme Court when he became embroiled in an explosive and deadly case that threatened to change the course of the civil rights movement and cost him his life. In 1949, Florida’s orange industry was booming, and citrus barons got rich on the backs of cheap Jim Crow labor. To maintain order and profits, they turned to Willis V. McCall, a violent sheriff who ruled Lake County with murderous resolve. When a white seventeen-year-old Groveland girl cried rape, McCall was fast on the trail of four young blacks who dared to envision a future for themselves beyond the citrus groves. By day’s end, the Ku Klux Klan had rolled into town, burning the homes of blacks to the ground and chasing hundreds into the swamps, hell-bent on lynching the young men who came to be known as “the Groveland Boys.” And so began the chain of events that would bring Thurgood Marshall, the man known as “Mr. Civil Rights,” into the deadly fray. Associates thought it was suicidal for him to wade into the “Florida Terror” at a time when he was irreplaceable to the burgeoning civil rights movement, but the lawyer would not shrink from the fight—not after the Klan had murdered one of Marshall’s NAACP associates involved with the case and Marshall had endured continual threats that he would be next. Drawing on a wealth of never-before-published material, including the FBI’s unredacted Groveland case files, as well as unprecedented access to the NAACP’s Legal Defense Fund files, King shines new light on this remarkable civil rights crusader, setting his rich and driving narrative against the heroic backdrop of a case that U.S. Supreme Court justice Robert Jackson decried as “one of the best examples of one of the worst menaces to American justice.”

The 873rd greatest nonfiction book of all time