Masscult and Midcult: Essays Against the American Grain by Dwight Macdonald 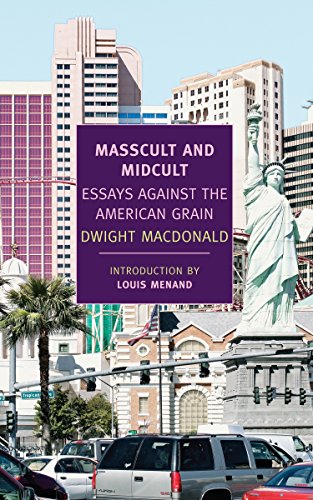 Political radical, trenchant essayist, and impresario of the New York intellectuals, Dwight Macdonald was one of the towering figures of twentieth-century American letters. In his most famous and controversial essay, "Masscult and Midcult", MacDonald turns his formidable critical attention to what he sees as a new, and potentially catastrophic, development in the history of Western civilization: the influence-by turns distorting, destructive, and inadvertently ridiculous-of mass culture on high culture. In this new collection of essays, ranging in subject matter from Ernest Hemingway, James Agee, and Tom Wolfe to Webster's Dictionary and the Revised Standard Version of the Bible, Macdonald is shrewd, passionate, and bracingly alive to the complexities of his subject, which he defines as being "not the dead sea of masscult but rather the life of the tide line where higher and lower organisms compete for survival."

The 1172nd greatest nonfiction book of all time