Hard Times: An Oral History of the Great Depression by Studs Terkel 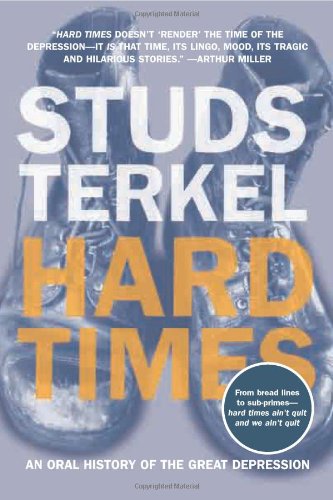 In this unique recreation of one of the most dramatic periods in modern American history, Studs Terkel recaptures the Great Depression of the 1930s in all its complexity. featuring a mosaic of memories from politicians, businessmen, artists, and writers, from those who were just kids to those who remember losing a fortune, Hard Times is not only a gold mine of information but a fascinating interplay of memory and fact, revealing how the Depression affected the lives of those who experienced it firsthand. "A huge anthem in praise of the American spirit." —Saturday Review "Wonderful! The American memory, the American way, the American voice. It will resurrect your faith in all of us to read this book." —Newsweek "An invaluable record... The talk of people who remember and those who only heard; of those who suffered and those who didn't; of those who lost everything and those who had nothing to lose; and of those who were part of the problem, those who tried to solve it, and those who were caught in between." —The New York Times "Open Studs Terkel's book to almost any page and rich memories spill out... Read a page, any page. Then try to stop." —National Observer

The 228th greatest nonfiction book of all time