The Nibelungenlied by Anonymous 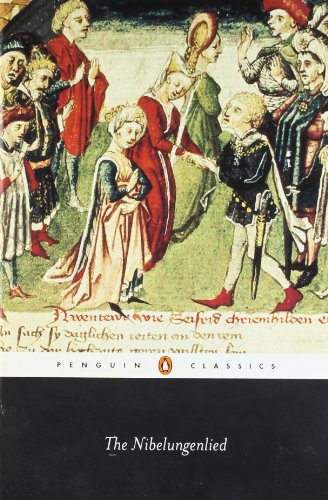 Thought to have been first written down in the 12th century by an author who is still unknown, the Nibelungenlied, translated from Middle High German as the Song of the Nibelungs, is an epic German poem reflecting the oral tradition, heroic motifs, and actual events and individuals from the 5th and 6th centuries. This remarkable work begins with an assurance of both joy and sorrow, though ultimately tragedy reins in the Nibelungenlied. The early chapters recount the young life of Siegfried, a great Netherlands prince, who slew a dragon and bathed in its blood while still young, giving him extraordinary strength. He goes on to meet the lovely princess Kriemhild, whose brother Gunther requires his help to marry the strong Icelandic Queen Brünhild in exchange for his sister's hand. All is well until Brünhild discovers the deception of Gunther and Siegfried, and her successful plot to murder the latter incites bloody revenge from Kriemhild. from the court of the Burgundians to the court of Etzel, from terrible deaths to hidden treasure, the Nibelungenlied is a masterful illumination of German antiquity and dramatic legend. Often and justly compared to the Iliad of the Greeks, this skillful epic poem has inspired artists throughout the centuries, most notably Richard Wagner in his opera cycle 'The Ring,' and will doubtlessly continue to inspire readers in the centuries to come.

The 934th greatest fiction book of all time