The Code of the Woosters by P. G. Wodehouse 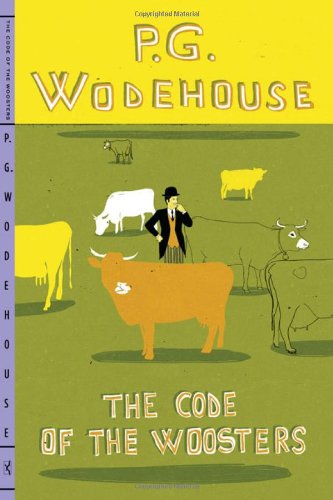 “To dive into a Wodehouse novel is to swim in some of the most elegantly turned phrases in the English language.”—Ben Schott Follow the adventures of Bertie Wooster and his gentleman’s gentleman, Jeeves, in this stunning new edition of one of the greatest comic novels in the English language. When Aunt Dahlia demands that Bertie Wooster help her dupe an antique dealer into selling her an 18th-century cow-creamer. Dahlia trumps Bertie's objections by threatening to sever his standing invitation to her house for lunch, an unthinkable prospect given Bertie's devotion to the cooking of her chef, Anatole. A web of complications grows as Bertie's pal Gussie Fink-Nottle asks for counseling in the matter of his impending marriage to Madeline Bassett. It seems Madeline isn't his only interest; Gussie also wants to study the effects of a full moon on the love life of newts. Added to the cast of eccentrics are Roderick Spode, leader of a fascist organization called the Saviors of Britain, who also wants that cow-creamer, and an unusual man of the cloth known as Rev. H. P. "Stinker" Pinker. As usual, butler Jeeves becomes a focal point for all the plots and ploys of these characters, and in the end only his cleverness can rescue Bertie from being arrested, lynched, and engaged by mistake!

The 533rd greatest fiction book of all time