Poems by Machado by Antonio Machado 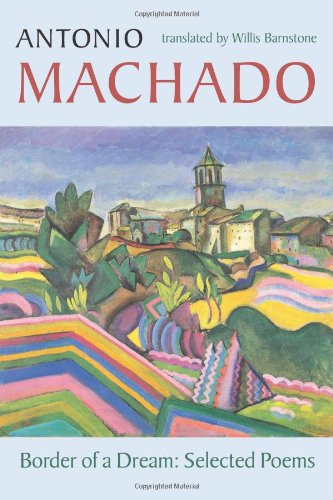 Antonio Machado, a school teacher and philosopher and one of Spain’s foremost poets of the twentieth century, writes of the mountains, the skies, the farms and the sentiments of his homeland clearly and without narcissism: “Just as before, I’m interested/in water held in;/ but now water in the living/rock of my chest.” “Machado has vowed not to soar too much; he wants to ‘go down to the hells’ or stick to the ordinary,” Robert Bly writes in his introduction. He brings to the ordinary—to time, to landscape and stony earth, to bean fields and cities, to events and dreams—magical sound that conveys order, penetrating sight and attention. “The poems written while we are awake…are more original and more beautiful, and sometimes more wild than those made from dreams,” Machado said. In the newspapers before and during the Spanish Civil War, he wrote of political and moral issues, and, in 1939, fled from Franco’s army into the Pyrenees, dying in exile a month later. When in 1966 a bronze bust of Machado was to be unveiled in a town here he had taught school, thousands of people came in pilgrimage only to find the Civil Guard with clubs and submachine guns blocking their way. This selection of Machado’s poetry, beautifully translated by Bly, begins with the Spanish master’s first book, Times Alone, Passageways in the House, and Other Poems (1903), and follows his work to the poems published after his death: Poems from the Civil War (written during 1936–1939).

The 1011th greatest fiction book of all time