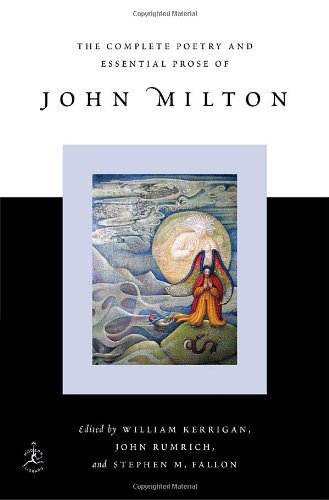 John Milton is, next to William Shakespeare, the most influential English poet, a writer whose work spans an incredible breadth of forms and subject matter. The Complete Poetry and Essential Prose of John Milton celebrates this author’s genius in a thoughtfully assembled book that provides new modern-spelling versions of Milton’s texts, expert commentary, and a wealth of other features that will please even the most dedicated students of Milton’s canon. Edited by a trio of esteemed scholars, this volume is the definitive Milton for our time. In these pages you will find all of Milton’s verse, from masterpieces such as Paradise Lost–widely viewed as the finest epic poem in the English language–to shorter works such as the Nativity Ode, Lycidas,, A Masque and Samson Agonistes. Milton’s non-English language sonnets, verses, and elegies are accompanied by fresh translations by Gordon Braden. Among the newly edited and authoritatively annotated prose selections are letters, pamphlets, political tracts, essays such as Of Education and Areopagitica, and a generous portion of his heretical Christian Doctrine. These works reveal Milton’s passionate advocacy of controversial positions during the English Civil War and the Commonwealth and Restoration periods. With his deep learning and the sensual immediacy of his language, Milton creates for us a unique bridge to the cultures of classical antiquity and medieval and Renaissance Christianity. With this in mind, the editors give careful attention to preserving the vibrant energy of Milton’s verse and prose, while making the relatively unfamiliar aspects of his writing accessible to modern readers. Notes identify the old meanings and roots of English words, illuminate historical contexts–including classical and biblical allusions–and offer concise accounts of the author’s philosophical and political assumptions. This edition is a consummate work of modern literary scholarship.

The 875th greatest fiction book of all time