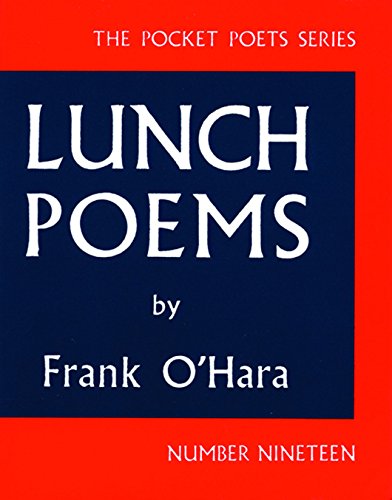 Celebrate the 50th Anniversary of Frank O'Hara's Lunch Poems Lunch Poems, first published in 1964 by City Lights Books as number nineteen in the Pocket Poets series, is widely considered to be Frank O'Hara's freshest and most accomplished collection of poetry. Edited by the poet in collaboration with Lawrence Ferlinghetti and Donald Allen, who had published O'Hara's poems in his monumental The New American Poetry in 1960, it contains some of the poet's best known works including "The Day Lady Died," "Ave Maria," and "Poem" [Lana Turner has collapsed!].This new limited 50th anniversary edition contains a preface by John Ashbery and an editor's note by City Lights publisher Lawrence Ferlinghetti, along with facsimile reproductions of a selection of previously unpublished correspondence between Ferlinghetti and O'Hara that shed new light on the preparation of Lunch." Lunch Poems Turns 50: Two years ago, the WNYC radio host Leonard Lopate asked his listeners to vote for 10 objects that best told the story of New York. (The Greek coffee cup and the subway token were Numbers 1 and 2, respectively.) The only work of art to make the list was Frank O'Hara's collection Lunch Poems. The San Francisco-based City Lights published a 50th anniversary edition of the book earlier this month. It contains a preface by John Ashbery as well as reproductions of letters between O'Hara and the publisher Lawrence Ferlinghetti, who is now 95." - John Williams, New York Times Book Review "City Lights' new reissue of the slim volume includes a clutch of correspondence between O'Hara and Lawrence Ferlinghetti . . . in which the two poets hash out the details of the book's publication: which poems to consider, their order, the dedication, and even the title. 'Do you still like the title Lunch Poems?' O'Hara asks Ferlinghetti. 'I wonder if it doesn't sound too much like an echo of Reality Sandwiches or Meat Science Essays.' 'What the hell,' Ferlinghetti replies, 'so we'll have to change the name of City Lights to Lunch Counter Press.'" - Nicole Rudick, The Paris Review "Frank O'Hara's famed collection was first published in 1964, and, to mark the fiftieth anniversary, City Lights is printing a special edition." - The New Yorker "Out to Lunch: Frank O'Hara's Masterwork Turns 50:""We all know lunch hour isn't actually for eating lunch; it's for running to the bank, going shopping, or throwing back a few midday business shots. In the case of Frank O'Hara, it was for poetry, and his might have been the best use of those precious 60 minutes in the whole dreary history of the corporate custom." - Heather Baysa, The Village Voice "The volume has never gone out of print, in part because O'Hara expresses himself in the same way modern Americans do: Like many of us, he tries to overcome the absurdity and loneliness of modern life by addressing an audience of anonymous others." - Micah Mattix, The Atlantic "I hope that everyone will delight in the new edition of Frank's LUNCH POEMS. The correspondence between Lawrence and Frank is great. Frank was just 33 when he wrote to Lawrence in 1959 and 38 when LUNCH POEMS was published! The fact that City Lights kept Frank's LUNCH POEMS in print all these years has been extraordinary, wonderful and a constant comfort. Hurray for independent publishers and independent bookstores. Many thanks always to Lawrence Ferlinghetti and everyone at City Lights." - Maureen O'Hara, sister of Frank O'Hara"Frank O'Hara's Lunch Poems - which has just been reissued in a 50th anniversary hardcover edition - recalls a world of pop art, political and cultural upheaval and (in its own way) a surprising innocence." - David Ulin, Los Angeles Times

The 960th greatest fiction book of all time