Why the West Rules - For Now: The Patterns of History, and What They Reveal About the Future by Ian Morris 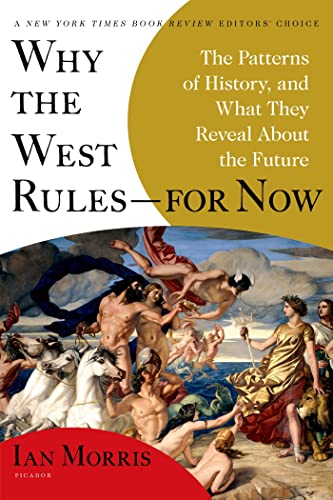 Why does the West rule? In this magnum opus, eminent Stanford polymath Ian Morris answers this provocative question, drawing on 50,000 years of history, archeology, and the methods of social science, to make sense of when, how, and why the paths of development differed in the East and West — and what this portends for the 21st century. There are two broad schools of thought on why the West rules. Proponents of "Long-Term Lock-In" theories such as Jared Diamond suggest that from time immemorial, some critical factor — geography, climate, or culture perhaps — made East and West unalterably different, and determined that the industrial revolution would happen in the West and push it further ahead of the East. But the East led the West between 500 and 1600, so this development can't have been inevitable; and so proponents of "Short-Term Accident" theories argue that Western rule was a temporary aberration that is now coming to an end, with Japan, China, and India resuming their rightful places on the world stage. However, as the West led for 9,000 of the previous 10,000 years, it wasn't just a temporary aberration. So, if we want to know why the West rules, we need a whole new theory. Ian Morris, boldly entering the turf of Jared Diamond and Niall Ferguson, provides the broader approach that is necessary, combining the textual historian's focus on context, the anthropological archaeologist's awareness of the deep past, and the social scientist's comparative methods to make sense of the past, present, and future — in a way no one has ever done before. From the Hardcover edition.

The 562nd greatest nonfiction book of all time