The Afterlife: A Memoir by Donald Antrim 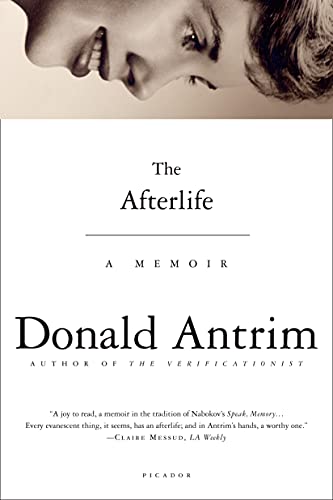 From "a fiercely intelligent writer" (The New York Times), a wry, poignant story of the difficult love between a mother and a son In the winter of 2000, shortly after his mother's death from cancer and malnourishment, Donald Antrim, author of the absurdist, visionary masterworks Elect Mr. Robinson for a Better World, The Hundred Brothers, and The Verificationist, began writing about his family. In pieces that appeared in The New Yorker and were anthologized in Best American Essays, Antrim explored his intense and complicated relationships with his mother, Louanne, an artist and teacher who was, at her worst, a ferociously destabilized and destabilizing alcoholic; his gentle grandfather, who lived in the mountains of North Carolina and who always hoped to save his daughter from herself; and his father, who married Louanne twice. The Afterlife is not a temporally linear coming-of-age memoir; instead, Antrim follows a logic of unconscious life, of dreams and memories, of fantasies and psychoses, the way in which the world of the alcoholic becomes a sleepless, atemporal world. In it, he comes to terms with—and fails to comes to terms with—the nature of addiction and the broken states of loneliness, shame, and loss that remain beyond his power to fully repair. This is a tender and even blackly hilarious portrait of a family—faulty, cracked, enraging. It is also the story of the way the author works, in part through writing this book, to become a man more fully alive to himself and to others, a man capable of a life in which he may never learn, or ever hope to know, the nature of his origins.

The 548th greatest nonfiction book of all time