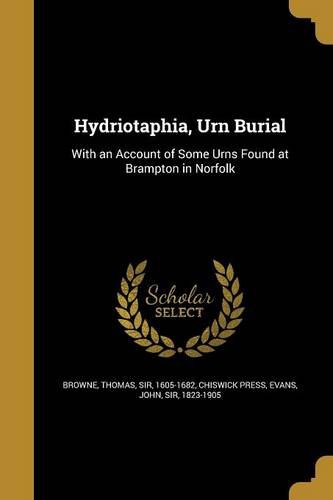 Hydriotaphia, Urn Burial, or, a Discourse of the Sepulchral Urns lately found in Norfolk is a work by Sir Thomas Browne, published in 1658 as the first part of a two-part work that concludes with The Garden of Cyrus. Its nominal subject was the discovery of a Roman[1] urn burial in Norfolk. The discovery of these remains prompts Browne to deliver, first, a description of the antiquities found, and then a survey of most of the burial and funerary customs, ancient and current, of which his era was aware. The most famous part of the work is the apotheosis of the fifth chapter, where Browne declaims – But man is a Noble Animal, splendid in ashes, and pompous in the grave, solemnizing Nativities and Deaths with equal lustre, nor omitting Ceremonies of bravery, in the infamy of his nature. Life is a pure flame, and we live by an invisible Sun within us.

The 1265th greatest nonfiction book of all time