Amadis of Gaul by 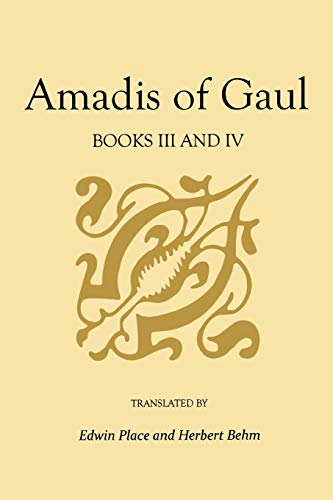 Amadís de Gaula (Spanish: Amadís de Gaula, IPA: [amaˈðis ðe ˈɣaula]); is a landmark work among the chivalric romances which were in vogue in sixteenth-century Spain, although its first version, much revised before printing, was written at the onset of the 14th century. The earliest surviving edition of the known text, by Garci Rodríguez de Montalvo (not Ordóñez de Montalvo), was published in Zaragoza in 1508, although almost certainly there were earlier printed editions, now lost.[1] It was published in four books in Castilian, but its origins are unclear: The narrative originates in the late post-Arthurian genre and had certainly been read as early as the 14th century by the chancellor Pero López de Ayala as well as his contemporary Pero Ferrús. Montalvo himself confesses to have amended the first three volumes, and to be the author of the fourth. Additionally, in the Portuguese Chronicle by Gomes Eannes de Azurara (1454), Amadis is attributed to Vasco de Lobeira, who was knighted after the Battle of Aljubarrota (1385). However, although other sources claim that the work was, in fact, a copy of one João de Lobeira, not troubadour Vasco de Lobeira, and that it was a translation into Castilian Spanish of an earlier work, probably from the beginning of the 14th century, no primitive version in the original Portuguese is known. The inspiration for the "Amadis de Gaula" appears to be the blocked marriage of Infanta Constanza of Aragon with Henry of Castile in 1260 (see Juan Manuel's Libro de las tres razones [es] of 1335), as blocked was also Oriana's marriage to Amadis. A more recent opinion attributes "Amadis" to Henry of Castile and León, due to evidence linking his biography with the events in "Amadis". Henry of Castile died in 1305. In his introduction to the text, Garci Rodríguez de Montalvo explains that he has edited the first three books of a text in circulation since the 14th century. Montalvo also admits to adding a fourth as yet unpublished book as well as adding a continuation (Las sergas de Esplandián), which he claims was found in a buried chest in Constantinople and transported to Spain by a Hungarian merchant (the famous motif of the found manuscript).

The 1489th greatest fiction book of all time