News from Nowhere by William Morris 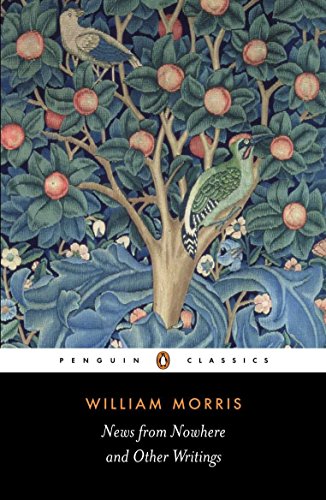 News from Nowhere (1890) is a classic work combining utopian socialism and soft science fiction written by the artist, designer and socialist pioneer William Morris. It was first published in serial form in the Commonweal journal beginning on 11 January 1890. In the novel, the narrator, William Guest, falls asleep after returning from a meeting of the Socialist League and awakes to find himself in a future society based on common ownership and democratic control of the means of production. In this society there is no private property, no big cities, no authority, no monetary system, no divorce, no courts, no prisons, and no class systems. This agrarian society functions simply because the people find pleasure in nature, and therefore they find pleasure in their work. The novel explores a number of aspects of this society, including its organisation and the relationships which it engenders between people. Morris fuses Marxism and the romance tradition when he presents himself as an enchanted figure in a time and place different from Victorian England. As Morris, the romance character, quests for love and fellowship—and through them for a reborn self—he encounters romance archetypes in Marxist guises. Old Hammond is both the communist educator who teaches Morris the new world and the wise old man of romance. Dick and Clara are good comrades and the married lovers who aid Morris in his wanderings. The journey on the Thames is both a voyage through society transformed by revolution and a quest for happiness. The goal of the quest, met and found though only transiently, is Ellen, the symbol of the reborn age and the bride the alien cannot win. Ellen herself is a multidimensional figure: a working class woman emancipated under socialism, she is also a benign nature spirit as well as the soul in the form of a woman. The book offers Morris' answers to a number of frequent objections to socialism, and underlines his belief that socialism will entail not only the abolishment of private property but also of the divisions between art, life, and work. In the novel, Morris tackles one of the most common criticisms of socialism; the supposed lack of incentive to work in a communistic society. Morris' response is that all work should be creative and pleasurable. This differs from the majority of Socialist thinkers, who tend to assume that while work is a necessary evil, a well-planned equal society can reduce the amount of work needed to be done by each worker. News From Nowhere was written as a libertarian socialist response to an earlier book called Looking Backward, a book that epitomises a kind of state socialism that Morris abhorred. It was also meant to directly influence various currents of thought at the time regarding the tactics to bring about socialism.

The 1063rd greatest fiction book of all time