The Thin Man by Dashiell Hammett 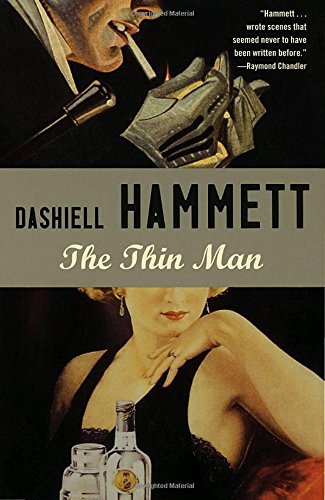 The Thin Man (1934) is a detective novel by Dashiell Hammett, originally published in the December 1933 issue of Redbook. It appeared in book form the following month. Hammett never wrote a sequel but the book became the basis for a successful six-part film series, which also began in 1934 with The Thin Man and starred William Powell and Myrna Loy. The Thin Man television series aired on NBC from 1957-59, and starred Peter Lawford and Phyllis Kirk .In 1999, Knopf published a collection of Hammett's early works, including an early draft of The Thin Man. While some story elements were used in one of the sequel movies, this early draft is very different from the final published novel.Although Hammett lived until 1961, The Thin Man was his last published novel. Lillian Hellman, in an introduction to a compilation of Hammett's five novels, contemplated several explanations for Hammett's retirement as a novelist, I have been asked many times over the years why he did not write another novel after The Thin Man. I do not know. I think, but I only think, I know a few of the reasons: he wanted to do a new kind of work; he was sick for many of those years and getting sicker. But he kept his work, and his plans for work, in angry privacy and even I would not have been answered if I had ever asked, and maybe because I never asked is why I was with him until the last day of his life. Following the success of the movie version of The Thin Man in 1934, Hammett was commissioned to work on screenplays for sequels. During the course of this work, he wrote After the Thin Man and Another Thin Man, which, discovered amongst Hammett's papers in 2011, together with instructions by Hammett for incorporation of additional elements written by screenwriters Albert Hackett and Frances Goodrich, were edited by Hammett's biographer Richard Layman in collaboration with Hammett's granddaughter Julie M. Rivett and published as novellas in Return of the Thin Man in 2012.

The 1248th greatest fiction book of all time