The 13 Clocks by James Thurber 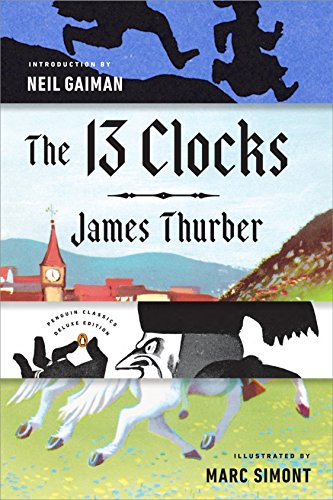 The 13 Clocks is a fantasy tale written by James Thurber and illustrator Marc Simont in 1950, while he was completing one of his other novels. It is written in a unique cadenced style, in which a mysterious prince must complete a seemingly impossible task to free a maiden from the clutches of an evil duke. It invokes many fairy tale motifs.The story is noted for Thurber's constant, complex wordplay, and his use of an almost continuous internal meter, with occasional hidden rhymes — akin to blank verse, but with no line breaks to advertise the structure. Other fantasy books by Thurber, such as Many Moons, The Wonderful O (published 1958), and particularly The White Deer, also contained hints of this unusual prose form, but here it becomes a universal feature of the text, to the point where it is possible to predict the word order for a given phrase (for example, "the Golux said" vs. "said the Golux") by looking at the pattern of emphasis in the preceding phrase. By the time he wrote this book, Thurber was blind, so he could not draw cartoons for the book, as he had done with The White Deer five years earlier. He enlisted his friend Marc Simont to illustrate the original edition. The Golux is said to wear an "indescribable hat". Thurber made Simont describe all his illustrations, and was satisfied when Simont was unable to describe the hat. When it was reissued by Puffin Books, it was illustrated by Ronald Searle. The book has been reprinted by The New York Review Children's Collection, with original illustrations by Marc Simont and an introduction by Neil Gaiman.

The 1049th greatest fiction book of all time