The Human Stain by Philip Roth 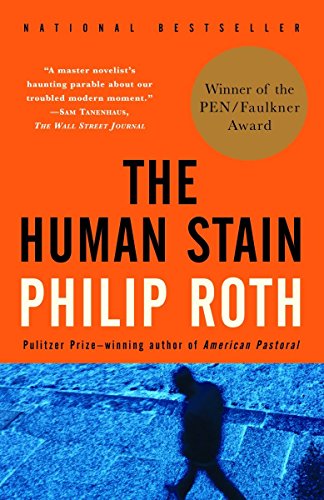 The Human Stain is set in 1990s America, the time of the culture wars, political correctness and the Bill Clinton-Monica Lewinsky scandal. The story is told by Nathan Zuckerman, a writer who lives a secluded life until Coleman Silk becomes his new neighbor. Silk is a classics professor and dean of faculty at Athena College, a fictional institution in the Berkshires of western Massachusetts. At 71, Silk falls victim to an unjustified charge of racism against two black students, whom he calls "spooks" because they had never shown up in his seminar: "Do they exist or are they spooks?" This incident leads to Silk's resignation and soon after to the death of his wife Iris. Silk starts an affair with one of the school's janitors, Faunia Farley, a 34 year old woman who was married to an alcoholic, drug-addicted, abusive and disturbed Vietnam veteran. Through flashbacks, it is revealed that Coleman Silk has been living a lie for most of his life: he is actually a light-skinned black man passing as white and Jewish.

The 477th greatest fiction book of all time