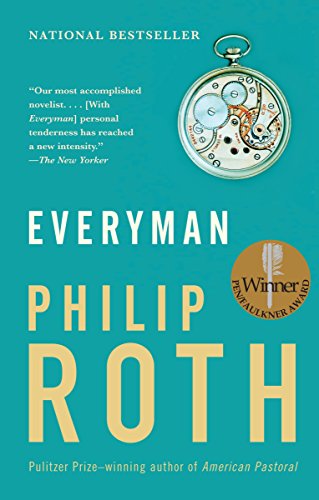 The book begins at the funeral of its protagonist. The remainder of the book, which ends with his death, looks mournfully back on episodes from his life, including his childhood in Elizabeth, New Jersey, where he and his older brother, Howie, worked in his father's shop, Everyman's Jewelry Store. He has been married three times, with two sons from his first marriage who resent him for leaving their mother, and one daughter from his second marriage who treats him with kindness and compassion, though he divorced her mother after beginning an affair with a 24-year-old Danish model, who subsequently became his third wife. Having divorced her as well, he has moved in his old age to a retirement community at the New Jersey shore, where he lives alone and attempts to paint, having passed up a career as an artist early in his life to work in advertising in order to support himself and his family. The book traces the protagonist's feelings as he gets increasingly old and sick, and his reflections of his own past, which has included his share of misdeeds and mistakes, as he ponders his impending death. The unnamed everyman, while an ordinary man and not a famous novelist, has much in common with Philip Roth; he is born, like Roth, in 1933; he grows up in Elizabeth, six miles away from Roth's native Newark; and he recounts a series of medical problems and a history of frequent hospitalization similar to that of the author.

The 2090th greatest fiction book of all time