Evicted: Poverty and Profit in the American City by Matthew Desmond 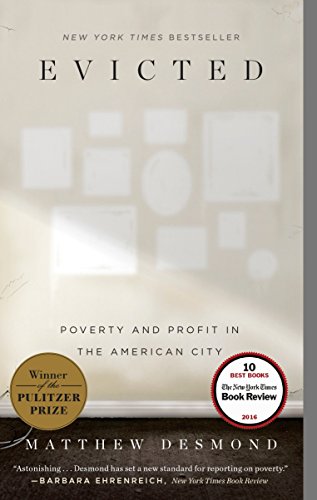 Evicted: Poverty and Profit in the American City is a 2016 non-fiction book by the American author Matthew Desmond. Set in the poorest areas of Milwaukee, Wisconsin, the book follows eight families struggling to pay rent to their landlords during the financial crisis of 2007–2008. It highlights the issues of extreme poverty, affordable housing, and economic exploitation in the United States.The book won the 2017 Pulitzer Prize for General Nonfiction. The Pulitzer committee selected the book "for a deeply researched exposé that showed how mass evictions after the 2008 economic crash were less a consequence than a cause of poverty". It also won the 2016 National Book Critics Circle Award, the 2017 PEN/John Kenneth Galbraith Award for Nonfiction, the 2017 Andrew Carnegie Medals for Excellence in Nonfiction Award, the 2017 Hillman Prize for Book Journalism, the 2017 Chicago Tribune Heartland Prize and the 2018 Order of the Coif Book Award.

The 704th greatest nonfiction book of all time