The Making of the Atomic Bomb by Richard Rhodes 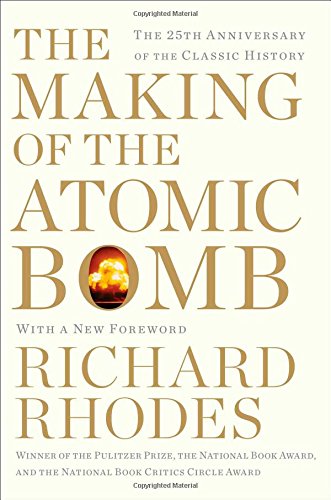 The Making of the Atomic Bomb, a book written by Richard Rhodes, won the 1988 Pulitzer Prize for General Non-Fiction, a National Book Award and a National Book Critics Circle Award. The 900-page book is a narrative of the history of the people and events during World War II from the discoveries leading to the science of nuclear fission in the 1930s, through the Manhattan Project and the atomic bombings of Hiroshima and Nagasaki. Praised by both historians and former Los Alamos weapon scientists alike, the book is considered a general authority on early nuclear weapons history, as well as the development of modern physics in general, during the first half of the twentieth century. Nobel Laureate Isidor Rabi, one of the prime participants in the dawn of the atomic age, said about the book, "An epic worthy of Milton. Nowhere else have I seen the whole story put down with such elegance and gusto and in such revealing detail and simple language which carries the reader through wonderful and profound scientific discoveries and their application."

The 77th greatest nonfiction book of all time