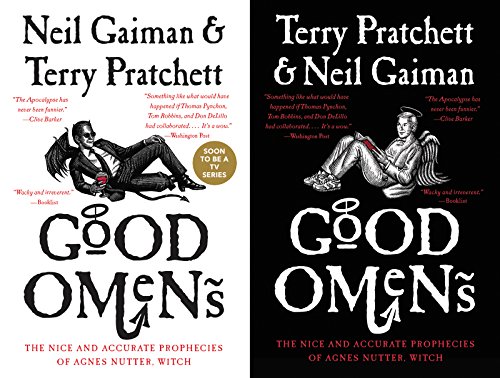 Good Omens: The Nice and Accurate Prophecies of Agnes Nutter, Witch (1990) is a World Fantasy Award nominated novel written in collaboration between Terry Pratchett and Neil Gaiman. The book is a comedy and a quasi-parody of the 1976 film The Omen (as well as other books and films of the genre), concerning the birth of the son of Satan, the coming of the End Times and the attempts of the angel Aziraphale and the demon Crowley to avert them, having become accustomed to their comfortable situations in the human world. A subplot features the gathering of the four horsemen of the Apocalypse—War, Famine, Pollution (Pestilence having retired in 1936 following the discovery of penicillin), and Death—the last of whom is characterised in a manner reminiscent of the personification of Death in Pratchett's Discworld novels and calls himself Azrael before his final exit.

The 2020th greatest fiction book of all time