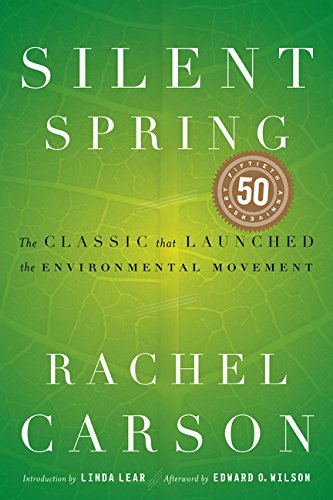 Silent Spring is a book written by Rachel Carson and published by Houghton Mifflin in September 1962. The book is widely credited with helping launch the environmental movement. When Silent Spring was published, Rachel Carson was already a well-known writer on natural history, but had not previously been a social critic. The book was widely read (especially after its selection by the Book-of-the-Month Club and the New York Times best-seller list), and inspired widespread public concerns with pesticides and pollution of the environment. Silent Spring facilitated the ban of the pesticide DDT in 1972 in the United States. The book documented detrimental effects of pesticides on the environment, particularly on birds. Carson said that DDT had been found to cause thinner egg shells and result in reproductive problems and death. She also accused the chemical industry of spreading disinformation, and public officials of accepting industry claims uncritically.

The 9th greatest nonfiction book of all time