An American Dilemma by Gunnar Myrdal 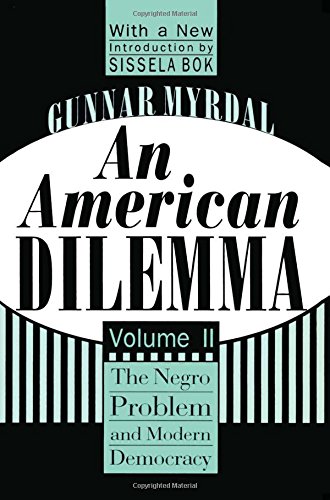 An American Dilemma: The Negro Problem and Modern Democracy is a 1944 study of race relations authored by Swedish economist Gunnar Myrdal and funded by The Carnegie Foundation. The foundation chose Myrdal because it thought that as a non-American, he could offer a more unbiased opinion. Myrdal's volume, at nearly 1,500 pages, painstakingly detailed what he saw as obstacles to full participation in American society that African-Americans faced as of the 1940s. It sold over 100,000 copies and went through 25 printings before going into its second edition in 1965. It was enormously influential in how racial issues were viewed in the United States, and it was cited in the landmark Brown v. Board of Education case "in general." The book was generally positive in its outlook on the future of race relations in America, taking the view that democracy would triumph over racism. In many ways it laid the groundwork for future policies of racial integration and affirmative action.

The 164th greatest nonfiction book of all time