Good-Bye to All That by Robert Graves 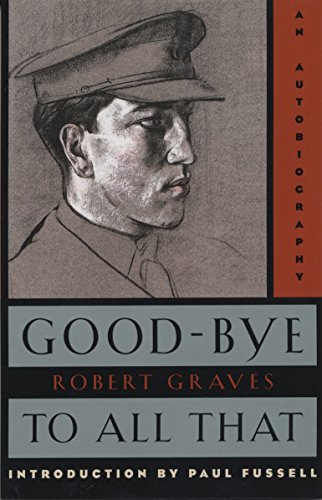 Good-bye to All That is the autobiography of Robert Graves. First published in 1929, the work is a landmark anti-war memoir of life in the trenches during World War I. The title expresses Graves' disillusionment in the existence of traditional, stable values in European and English society. Graves first wrote the work in his thirties, when he had a long and eventful life ahead of him, and the book deals mainly with his childhood, youth and military service. He devotes a large part of the book to his experiences of the First World War, where he gives a detailed description of trench warfare, including the tragic incompetence of the Battle of Loos. Many readers will be interested in his secondhand description of the killing of German prisoners of war by British, Canadian and Australian troops. Although he had not witnessed any incidents himself and knew of no large-scale massacres, he knew of a number of incidents where prisoners had been killed individually or in small groups, and he believed that a large proportion of Germans who surrendered never made it to prisoner-of-war camps. Graves was severely traumatized by his war experience. After he was wounded, he endured a five day train journey amid squalor and unchanged bandages. The trench telephone scared him such that he never lived with the technology for the rest of his life (he received an electric shock because the line was struck by lightning). Upon his return home, he describes being haunted by ghosts and nightmares. Laura Riding, Graves' lover, is credited with being a "spiritual and intellectual midwife" to the work, which made him famous. Graves heavily revised his book and re-published it in 1957 with many significant events and figures either excised or added.

The 146th greatest nonfiction book of all time