The Rise of the West by William H. McNeill 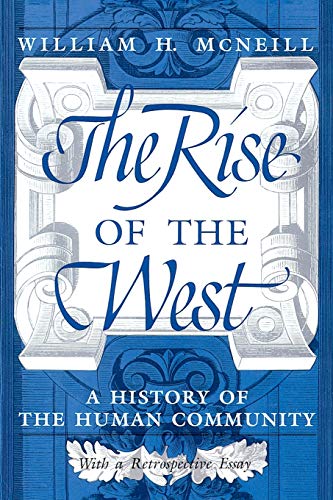 The Rise of the West explores human history in terms of the effect of different world civilizations on one another. McNeill assumes "decent familiarity with Western history," which allows describing "underrated" matters. The footnotes teem with specialized studies that support the bold strokes in the text. Development is thematic within periods rather than entirely chronological. The book is in three parts of approximately equal length. Part I begins with evolutionary prehistory and the breakthrough to civilization in Mesopotamia. This is followed by the era of Middle Eastern dominance and the formation of peripheral civilizations in India, Greece, and China to 500 B.C. Part II discusses the Eurasian cultural balance to 1500 A.D., including the expansion of Hellenism, the closure of the Eurasian ecumene, the development of major religions, the barbarian onslaught, resurgence of the Middle East, and the Steppe conquerors. McNeill proposes that the basic engine of world history during this period is the temporary primacy of different regions of the ecumene, with a rough parity re-established as innovations spread to other centers of civilization. The sequence is Hellenistic / Indian / Islamic / Chinese and Mongol. Generally the eras are structured in terms of the internal history of the dominant region, followed by the history of the rest of the world with a focus on how they reacted to the diffusing techniques and ideas of the dominant region. Part III examines the era of Western dominance. From 1500 to 1750 this is represented by the challenge of Western Europe to the world in a period of exploration and colonization and the changing balance of the ecumene in the Islamic world, the Far East, and Africa: before 1750, Western superiority is similar in scope to the primacy previously enjoyed by other regions. The book describes the "tottering balance" of older orders within Europe, European expansion and acculturation in outliers, including the Americas. The rise of the West on a cosmopolitan scale from 1750 to 1950 is described as to continued territorial expansion, industrialism, the democratic revolution, and intellectual aspects. This period marks a discontinuity: the global influence of the West expands beyond all historical parallels. The many drawings, maps, charts, and plates that complement the text provide a coherent portrait of the societies described. The book had a major impact on historical analysis, challenging the view of civilizations as independent entities subject to rise and fall, such as developed by Arnold J. Toynbee and Oswald Spengler. (The title of the book is a deliberate contrast to Spengler's The Decline of the West.) McNeill stresses instead the diffusion of techniques and ideas, making connections between civilizations crucially important. It has had a big influence upon the subsequent development of World Systems Theory. The rise of the West became a synonym for historical processes in Europe in the last 500 years and its effects on other civilizations. In this book, however, a unifying theme is interrelation and cultural diffusion from its Neolithic beginnings to the present.

The 617th greatest nonfiction book of all time