The Face of Battle by John Keegan 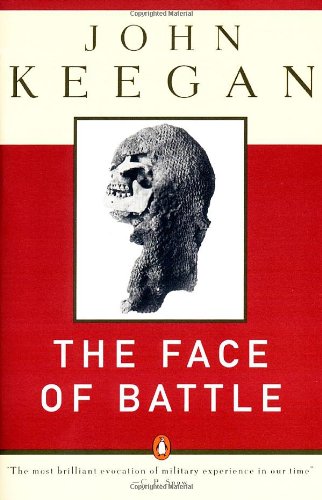 The Face of Battle, is a 1976 non-fiction book on military history by the English military historian John Keegan. It deals with the structure of warfare in three time periods—medieval Europe, the Napoleonic Era, and World War I—by analyzing three battles: Agincourt, Waterloo, and the Somme. All three of these battles involved British soldiers and occurred in approximately the same geographical area. The work was groundbreaking in that it does not examine the battles from only the generals' perspectives nor simply accumulate quotes from ordinary soldiers. Instead, it focuses on the practical mechanics of battle and critically examines popular myths about warfare. For instance, Keegan disputes the effectiveness of cavalry charges in even the Middle Ages. At Agincourt, the lightly armored archers dug stakes into the ground to impede horses, while heavy infantry who stood their ground had little to fear from cavalry. Focusing on the mechanics of battle, Keegan discusses troop spacing, the effectiveness of weapons and formations, and other measures of tactical importance. He also examines on the experience of the individual soldier of the time. This is particularly evident in the 1988 illustrated edition, whose frontispiece is a photograph of a weeping "Vietnamese soldier holding the body of his dead child".

The 210th greatest nonfiction book of all time