A History of Philosophy by Frederick Charles Copleston 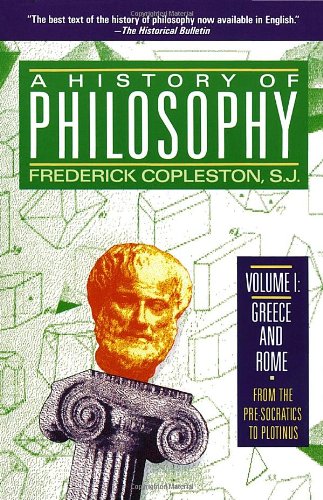 Copleston's History provides extensive coverage of Western philosophy from the Pre-Socratics through Dewey, Russell, Moore, Sartre and Merleau-Ponty. The first nine volumes, originally published between 1946 and 1974, were written for Catholic seminary students with the goal "of supplying Catholic ecclesiastical seminaries with a work that should be somewhat more detailed and of wider scope than the textbooks, commonly in use, and which at the same time should endeavour to exhibit the logical development and interconnection of philosophical systems." A tenth volume was added in 1986, and the eleventh is actually a collection of essays, which appeared in 1956 as Contemporary Philosophy. Throughout the eleven volumes, Copleston's Roman Catholic (Thomist) point of view is never hidden. All the same, it seems generally accepted that Copleston's treatment is fair and complete, even for philosophical positions that he does not support. Copleston's work has arguably come to represent the finest and most complete summary of Western philosophy now available.

The 483rd greatest nonfiction book of all time