The Hedgehog and the Fox by Isaiah Berlin 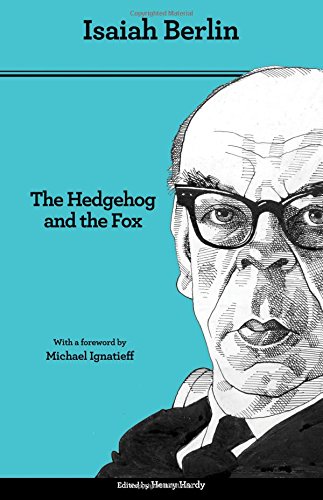 Berlin expands upon this idea to divide writers and thinkers into two categories: hedgehogs, who view the world through the lens of a single defining idea (examples given include Plato, Lucretius, Dante, Pascal, Hegel, Dostoevsky, Nietzsche, Ibsen, and Proust) and foxes who draw on a wide variety of experiences and for whom the world cannot be boiled down to a single idea (examples given include Herodotus, Aristotle, Erasmus, Shakespeare, Montaigne, Molière, Goethe, Pushkin, Balzac, Joyce, Anderson). Turning to Tolstoy, Berlin contends that at first glance, Tolstoy escapes definition into one of these two groups. He postulates, rather, that while Tolstoy's talents are those of a fox, his beliefs are that one ought to be a hedgehog, and thus Tolstoy's own voluminous assessments of his own work are misleading. Berlin goes on to use this idea of Tolstoy as a basis for an analysis of the theory of history that Tolstoy presents in his novel War and Peace. The essay has been published separately and as part of the collection Russian Thinkers, edited by Henry Hardy and Aileen Kelly.

The 220th greatest nonfiction book of all time