Zen and the Art of Motorcycle Maintenance by Robert M. Pirsig 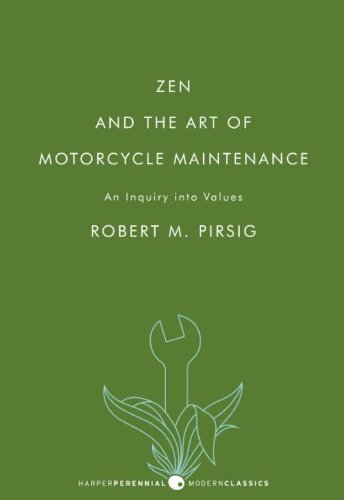 Zen and the Art of Motorcycle Maintenance: An Inquiry into Values is the first of Robert M. Pirsig's texts in which he explores his Metaphysics of Quality. The 1974 book describes, in first person, a 17-day motorcycle journey across the United States by the author (though he is not identified in the book) and his son Chris, joined for the first nine days by close friends John and Sylvia Sutherland. The trip is punctuated by numerous philosophical discussions, referred to as Chautauquas by the author, on topics including epistemology, ethical emotivism and the philosophy of science. The book sold over 4 million copies in twenty-seven languages and was described by the press as "the most widely read philosophy book, ever." It was originally rejected by 121 publishers, more than any other bestselling book, according to the Guinness Book of Records. The title is an incongruous play on the title of the book Zen in the Art of Archery by Eugen Herrigel. In its introduction, Pirsig explains that, despite its title, "it should in no way be associated with that great body of factual information relating to orthodox Zen Buddhist practice. It's not very factual on motorcycles, either."

The 163rd greatest nonfiction book of all time