Journey to the End of The Night by Louis-Ferdinand Céline 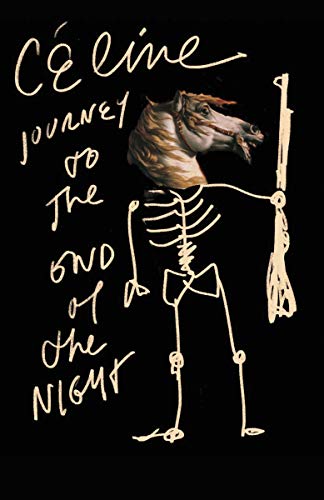 Journey to the End of Night is the first novel of Louis-Ferdinand Céline. This semi-autobiographical work describes antihero Ferdinand Bardamu. His surname, Bardamu, is derived from the French words Barda—the "pack" carried by World War I soldiers—and mu, the past participle of the verb mouvoir, meaning to move. Bardamu is involved with World War I, colonial Africa, and post-WWI America (where he works for the Ford Motor Company), returning in the second half of the work to France, where he becomes a medical doctor and establishes a practice in a poor Paris suburb, the fictional La Garenne-Rancy. The novel also satirizes the medical profession and the vocation of scientific research. The disparate elements of the work are linked together by recurrent encounters with Léon Robinson, a hapless character whose experiences parallel, to some extent, those of Bardamu. As its title suggests, Voyage au bout de la nuit is a nihilistic novel of savage, exultant misanthropy, combined, however, with cynical humour.

The 82nd greatest fiction book of all time